I’m quite convinced that good old Cock-a-Leekie Soup is actually in the Scottish bloodstream. It’s our go-to comfort food that makes all things right in the world. And why not, with only 4 ingredients and packed with flavour and goodness it’s just perfection in a bowl. 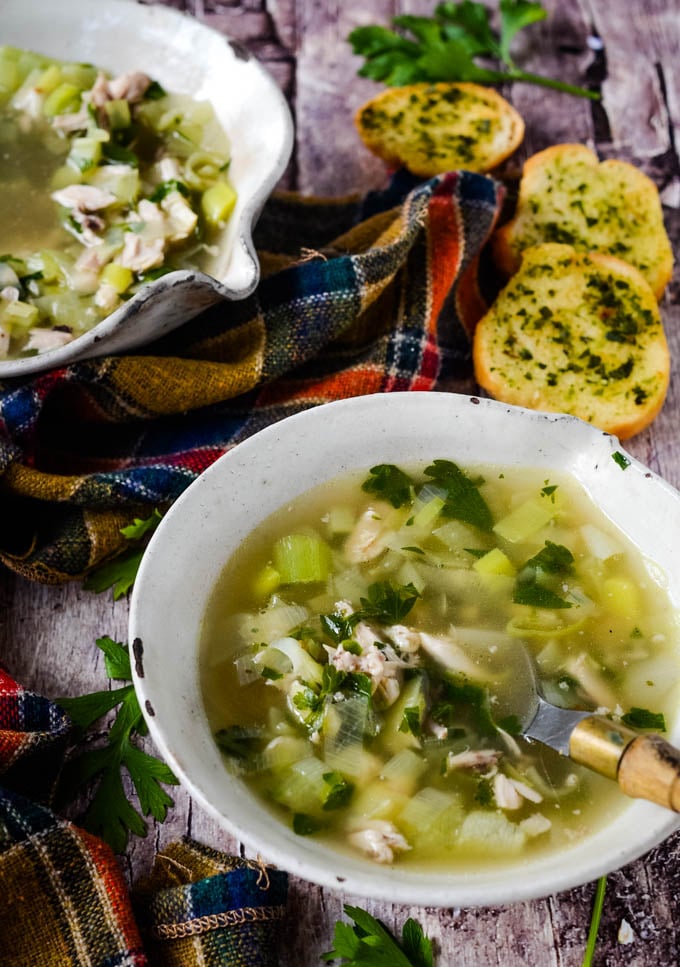 This cock-a-leekie soup is a great recipe to share this week, not just because I have come over all Scottish for Burns’ Night at the weekend.

But also because it is a good healthy recipe that is perfect for all those who are getting to grips with a healthier lifestyle and cutting the calories this month. 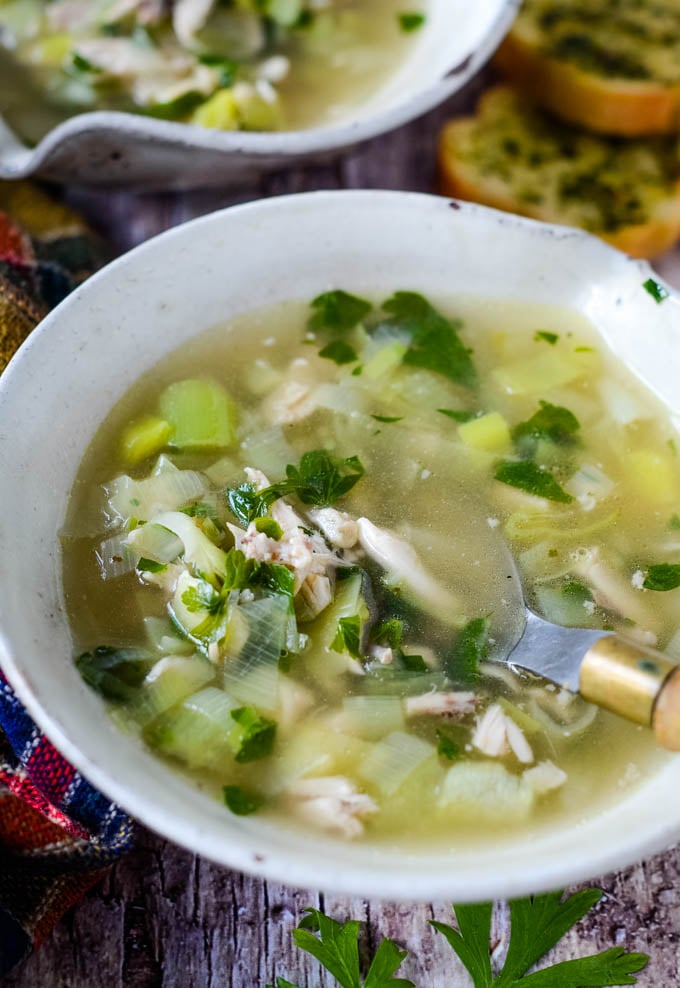 Cock-a-leekie soup is a Scottish classic, something my Mum used to make every week. The Scottish equivalent of the Jewish chicken soup for the soul that cures all ills.

It is sometimes called cockie-leekie soup but it’s all the same thing. A delicious and simple 5 ingredient chicken broth.

Cock-a-leekie is a very old soup indeed. The first recipe being printed in 1598.

Thought to actually originate in France and be a chicken and onion soup. However, leeks are far more popular in Scotland so it soon became chicken and leek soup. 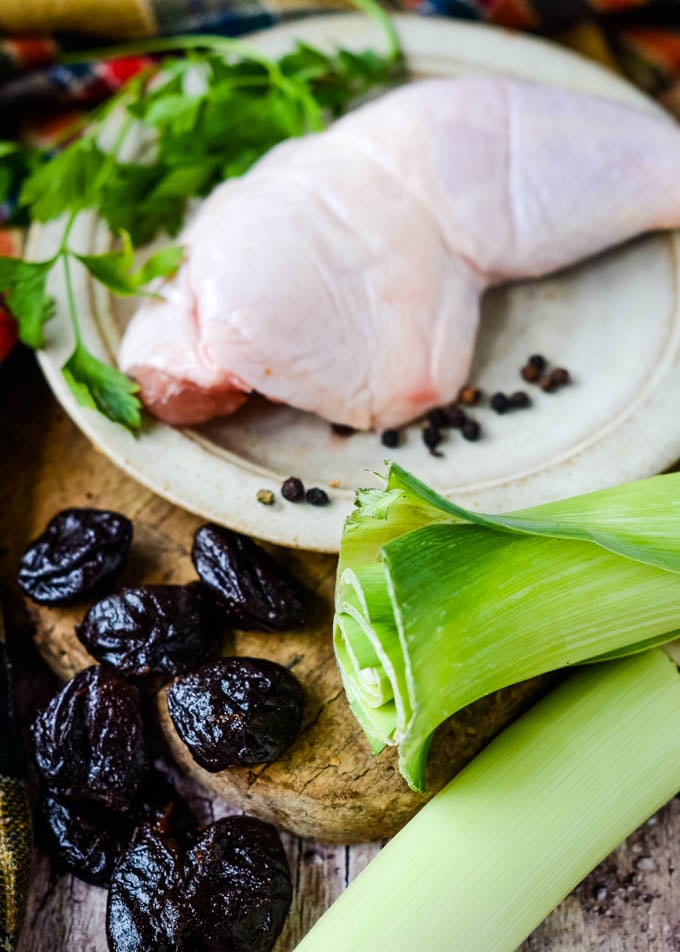 Sometimes the best recipes have the fewest ingredients, this one is a case in point. There are only 5 ingredients in traditional Scottish cock-a-leekie soup

Oh and water as well, but I am not counting that as an ingredient as I assume you already have that on tap so to speak. 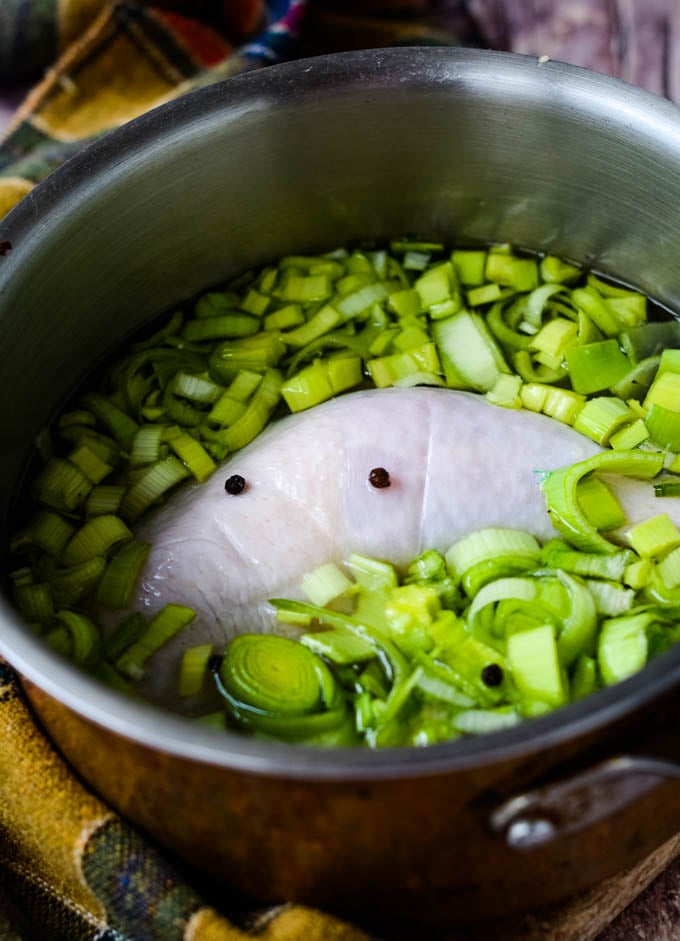 And yes, you read that right, there are prunes in this chicken soup recipe!

The prunes are very much a part of this ancient recipe. They lend sweetness and flavour all of their own.

Most folks remove the prunes before serving the cock-a-leekie soup. But you can leave them in if you like and enjoy the extra sweetness and a bit of texture too.

The use of fruit and meat together in pottages, rich stews/soups, dates back to Medieval times.

and you usually remove them before serving. You can, of course, omit this traditional fruity addition, but really you should give it a go.

Don’t knock it till you’ve tried it and all that. 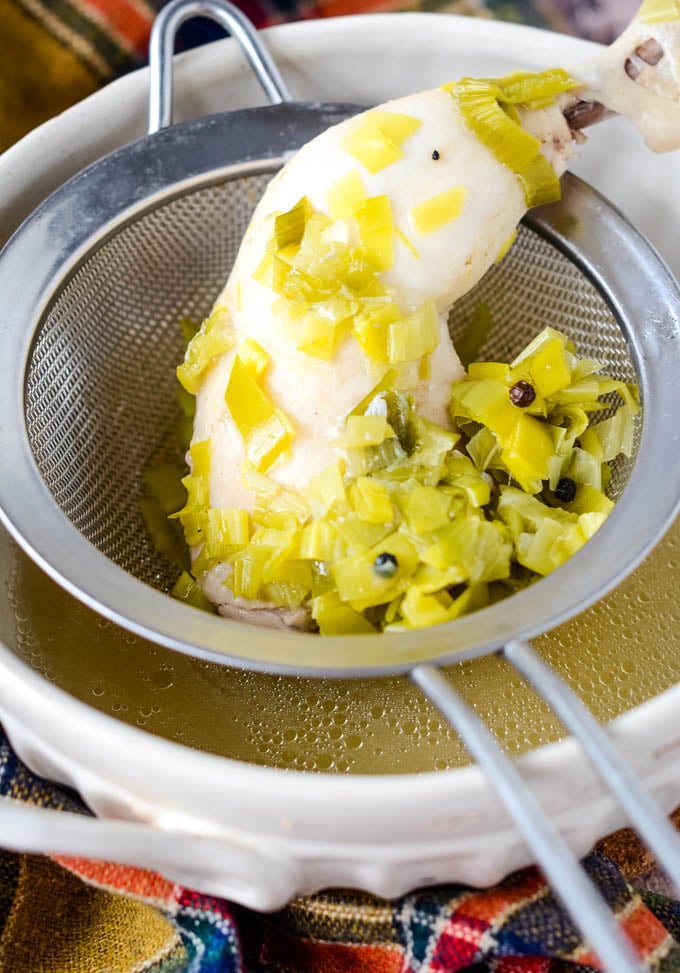 Unlike most soups that start with onion as their base cock-a-leekie has leeks and no onion at all. Scotland is famous for its leeks. This vegetable has both sweetness and savoury strength all in one place.

The green part of leeks is full of flavour and strength. Meanwhile, the tender white of a leek has a marvellous sweetness.

Musselburgh, the town where I grew up in Scotland is famed for the Musselburgh Leek. A variety known the world over for its flavour and ability to grow in the coldest of winters. 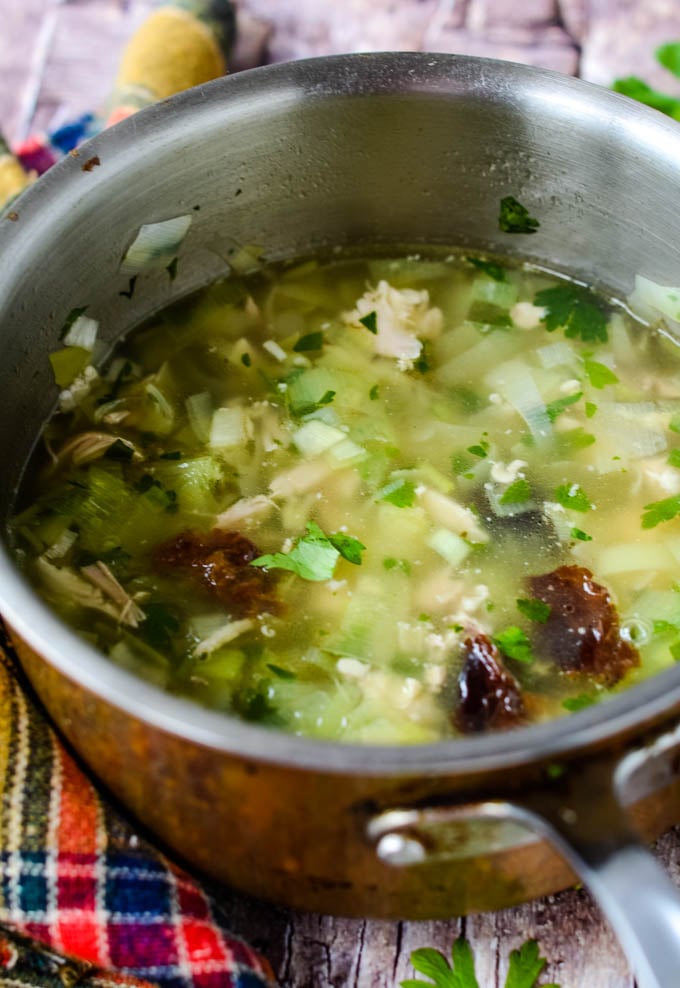 Originally one would use ‘an old boiling fowl’ to make traditional cock-a-leekie soup. However, these aren’t easy to come across in Tesco. So buy free-range organic chicken instead.

I have used a full chicken leg portion for my soup here as I was only making a small amount. Plus you get a lot of meat off the bones when cooked and this is easily enough for 2 people.

You can use chicken thighs or drumsticks too of course.

If you are making a lot of chicken soup then, by all means, boil up a whole chicken. 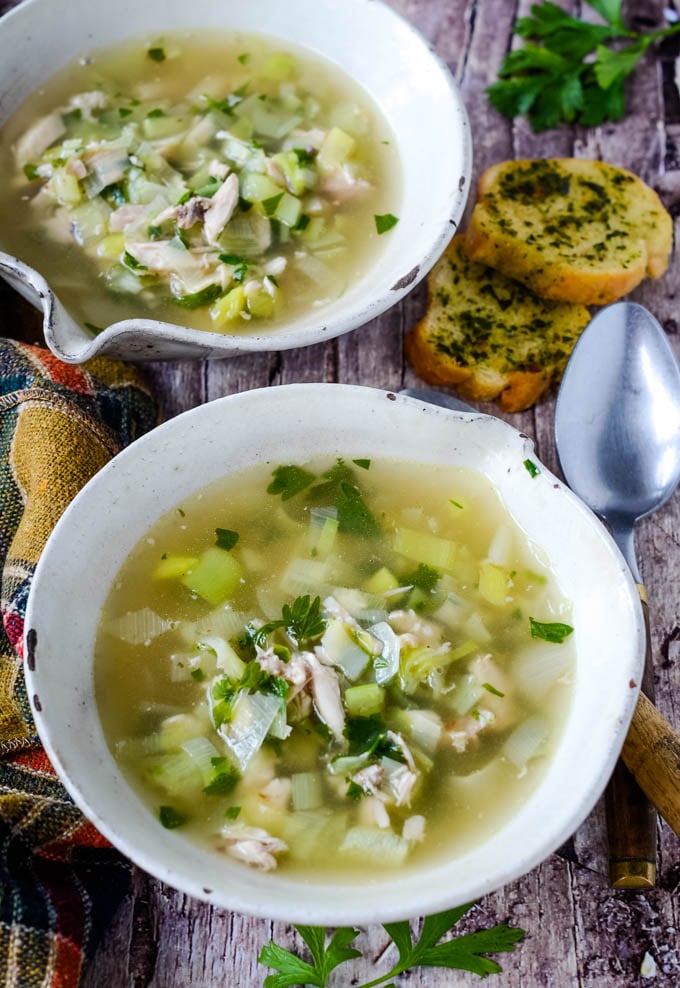 How to make cock-a-leekie soup

This is a super simple chicken and leek soup recipe, just a case of doing it in steps.

First, separate the green from the white part of the leek and toss the greek part into a pan along with your chicken and the black peppercorns.

Bring this to a boil then reduce heat, pop on a lid and simmer for 30 minutes. Remove it from the heat and let the chicken soup sit for 1 hour. This allows the flavours to come together beautifully.

Strain the soup by pressing it through a sieve with a wooden spoon to get all that gorgeous goodness from the leeks.

Now discard the leek and peppercorns and shred up the meat from the chicken.

Return the rich and aromatic chicken broth back to the pan and add the chopped white part of the leek. Also add the prunes and parsley and the shredded chicken.

Simmer for 10 more minutes and you are ready to serve your cock-a-leekie soup. It’s at this point that you can either serve the chicken soup with the prunes or remove them completely as they have done their job well. 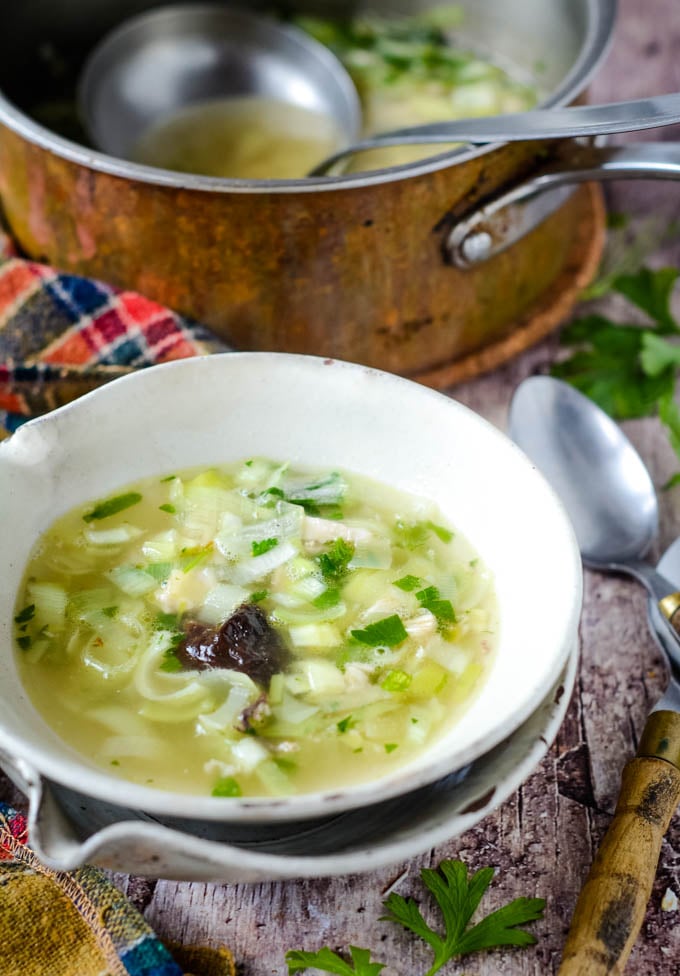 How much chicken and leek soup does this make?

I have just used a chicken leg portion and made 2 bowls of cock-a-leekie soup. All you need to do to make more is double up the recipe.

How long will this chicken soup keep?

It’ll keep for up to 4 days in the fridge.

Can you freeze cock-a-leekie soup?

Yes, but I would remove the prunes first and then just ladle the soup into freezer bags and keep in the freezer for up to 3 months. Defrost completely and heat till piping hot. 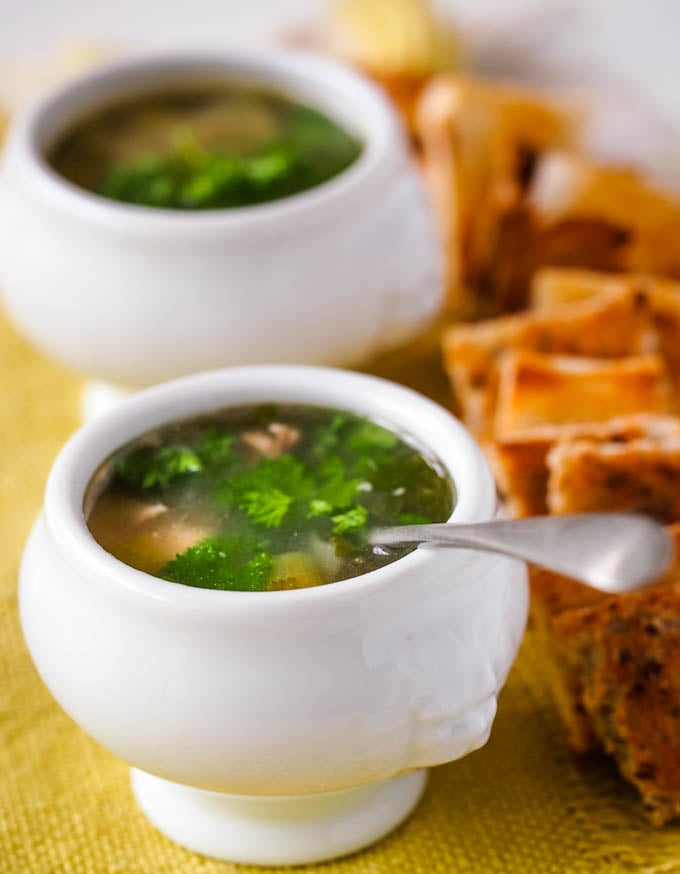 How to serve cock-a-leekie

Serve this flavourful chicken soup just with hunks of crusty bread on the side. It is packed with lots of chicken to is a meal in itself really. Perfect for lunch.

Or serve it in tiny bowls as a soup sip. I did this at my New Year party and it went down a treat. This is how I serve it in my book A Wee Taste Of Scotland. 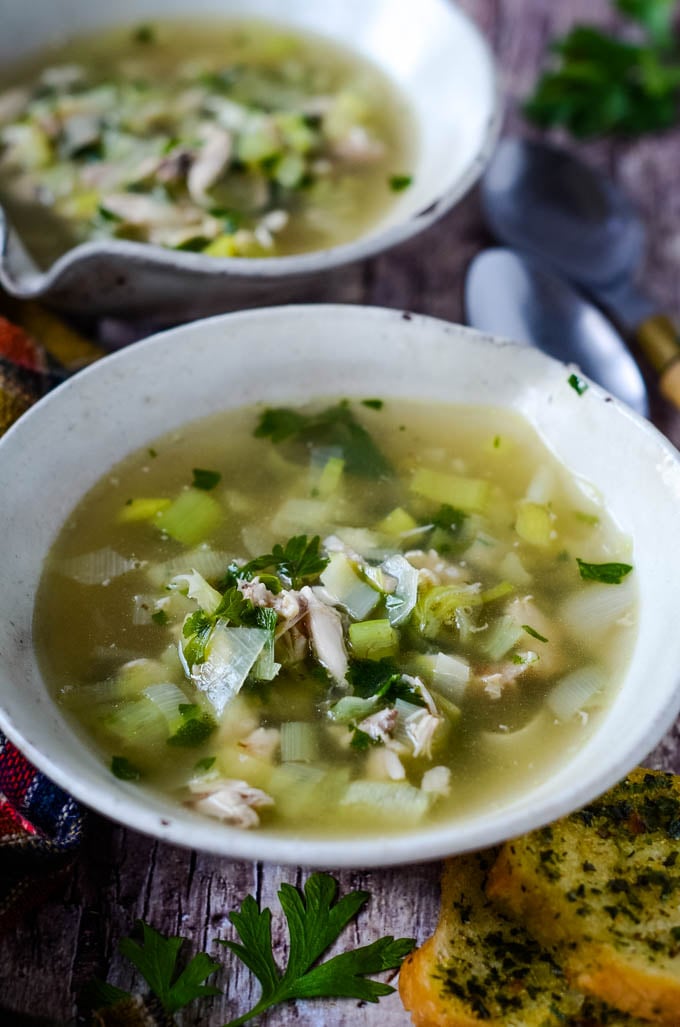 This really is a super soup. Healthy and light. Low in calories and high on nutrients. Leeks are packed with goodness and fibre and only 31 calories per 100g.

Prunes are well known to aid digestion and are also high in vitamins and potassium.

Chicken is low in calories and high on protein. Even the parsley in high in nutrients especially vitamin K.

Also note that cock-a-leekie soup is very much a low car soup with no noodles, potatoes or rice. 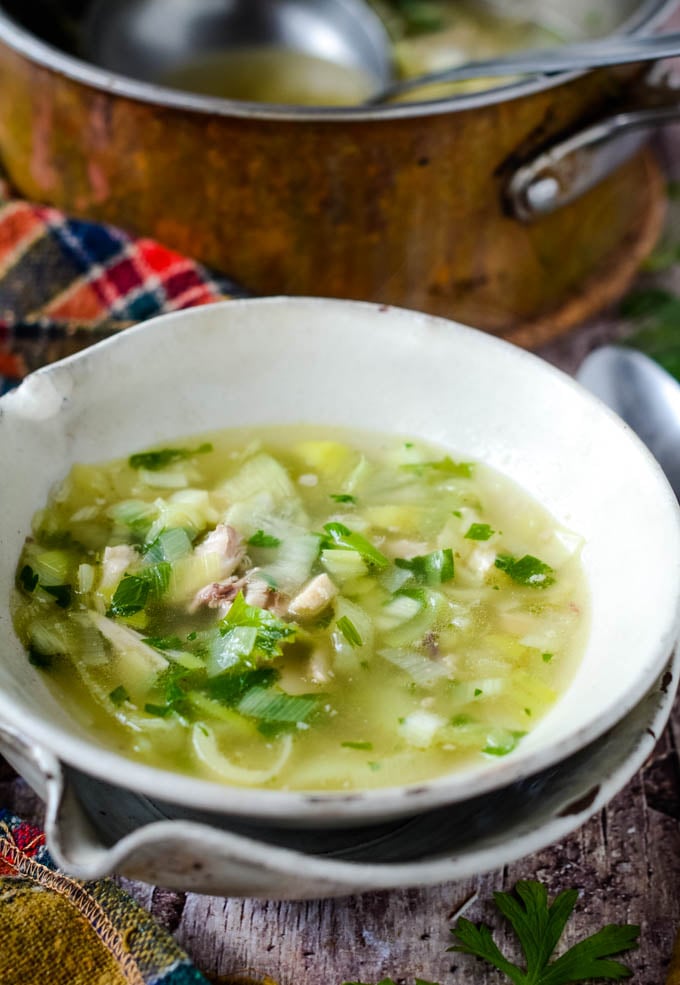 Some people like to add rice to their cock-a-leekie soup. Or potatoes or noodles to thicken it up. Personally I don’t think it needs any additives at all but it’s entirely up to you.

You can add carrot too or other veggies, but then you are just going into the realms of chicken and vegetable soup and not something as truly special as this cock-a-leekie.

This is just the way I make traditional Scottish cock-a-leekie soup, you’ll find a way that you like best I’m sure.

Looking for more super tasty Scottish recipes to try? Then check these out before you go; 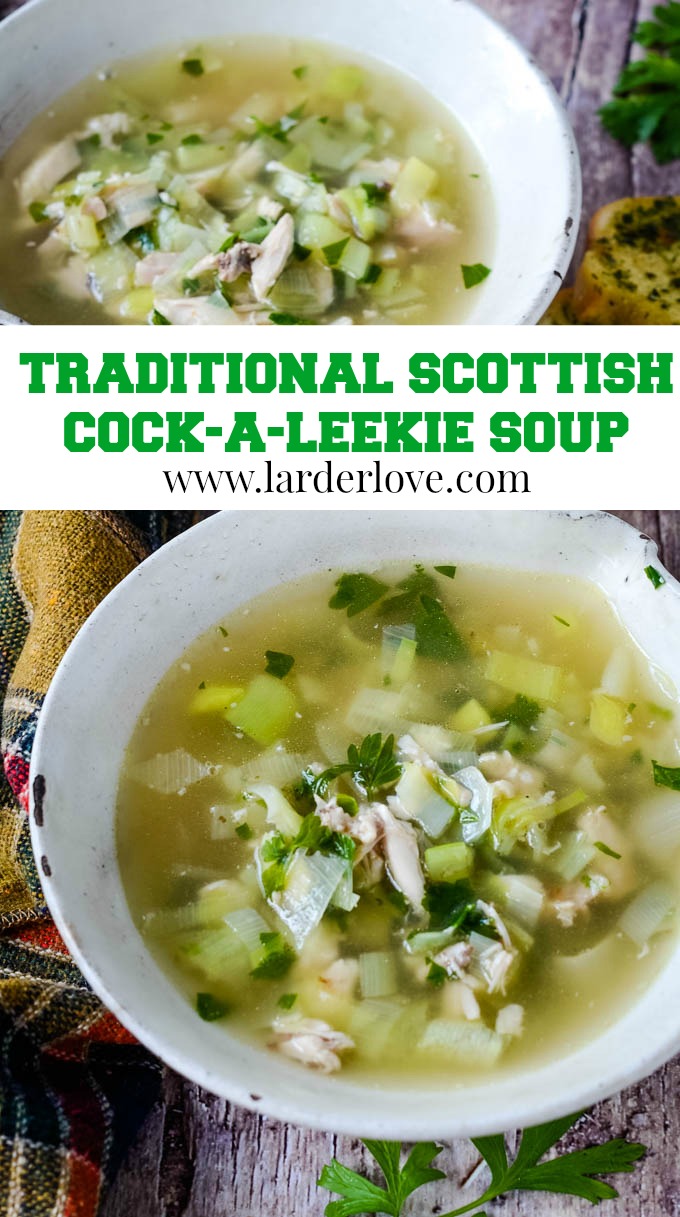 Finally, if you do try this traditional Scottish cock-a-leekie soup recipe don’t forget to leave a comment/rating below. I love hearing from readers and respond to everyone as soon as I can. Want more Larder Love? Then follow me on Instagram, Pinterest and Facebook and sign up for my newsletter too of course. 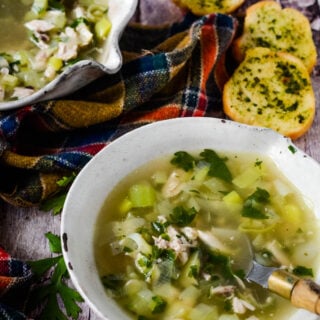