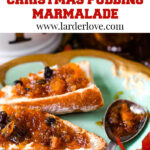 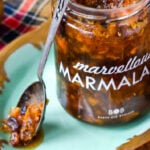 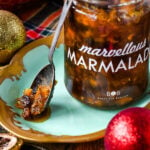 The perfect marriage between Christmas mincemeat/Christmas pudding and tangy citrus marmalade. What could be better for your toast or croissants throughout the festive season!

Why you’ll love this recipe

The fruity part – I’ve used a mix of unwaxed oranges and a lemon. You could use grapefruit in the mix, or mandarines, whatever you fancy. Just make sure it all comes to 1 kilo in weight.

Sweet stuff – I have used a mix of normal granulated white sugar and a little dark brown sugar. I like the almost caramel-like taste that brown sugar gives things. It makes this marmalade really have that rich Christmas pudding-type taste.

Mixed dried fruit – I used Tesco’s luxury dried fruit mix. This is a presoaked mix of sultanas, cherries, raisins, apricots, cranberries and mixed candied peel. If you haven’t got the presoaked type of dried fruit mix then simply put the fruit in a bowl and pour on about 4 tbsp of brandy into it, mix well and leave it for about an hour to plump up. You can use tea, water, orange juice or whisky to do this.

Get spicy – I really wanted to keep things simple with this Christmas pudding marmalade, so instead of giving you a list of spices to measure out I just used ready-made Mixed Spice from the supermarket.

Booze – No self-respecting Christmas pudding would ever be seen without some hooch in there and my marmalade is no exception! I have used brandy but you could use whisky or rum if you like. Alternatively, you can miss this out altogether.

How to remove the wax from fruit

If you haven’t got unwaxed fruit, don’t panic. Simply scrub the fruit in hot soapy water using a nail brush. This will remove the wax coating. Then rinse thoroughly and pat dry – voila! unwaxed fruit!

How to make this marmalade

I love this Christmas pudding marmalade recipe because it’s so simple and unlike many marmalade recipes it is pretty quick to cook too. You are not boiling peel for hours and losing the will to live.

The first step is to peel the zest from two of the oranges and the lemon and then chop this nice and finely. Try to avoid the white pith here.

Now chop up all the fruit into chunky pieces as this will make it easier for your food processor to handle. Remove any pips/stones/pits, whatever you want to call them. Blitz the fruit in your processor, I had to do mine in a couple of batches as I have a small processor. You don’t want a puree here, you want tiny bits of fruit so don’t let the machine run, use the pulse and check how it’s doing.

Next comes the cooking part of the marmalade and quite honestly this couldn’t be easier. Simply put the citrus fruit into a nice big pan along with the finely chopped peel, the mixed spice and your two different sugars. Heat this gently to dissolve the sugar entirely.

Add the mixed fruit and raise the temperature to a rolling boil. This is when you will know that a big high sided pot is the right thing to use as you really don’t want your Christmas pudding marmalade decorating the entire kitchen!

I boiled mine for about 30 minutes and it reached that magical 105C setting temperature. Check out my jam-making page on the link below that tells you all about setting points and how to check for them.

Finally, stir in the booze and you are ready to ladle that Christmas pudding marmalade into sterilised jars.

I love Christmas and making foodie gifts is my big thing. Bringing together the classic rich and fruity flavours of a Christmas pudding and making it into a tangy marmalade that you can use on your toast seemed like the perfect thing to do.

Why had I never thought of this before? After all I make my Vegetarian/Vegan Mincemeat every year and I make lots of marmalades. This Christmas pudding marmalade is almost like a marriage made in heaven, the perfect Christmas preserve!

How much does this recipe make?

I got 6 x 350g jars of Christmas pudding marmalade from this recipe. I wouldn’t double up the recipe if you want more, simply make another batch.

How long will this marmalade keep?

Your Christmas pudding marmalade should keep for up to a year in a cool dark place. Once opened store in the fridge and use within a month.

How to use this marmalade

Serve your Christmas pudding marmalade on toast or croissants for a festive breakfast treat.

Use this luscious marmalade instead of mincemeat in traditional mince pies, dare to be different!

You can use Christmas pudding marmalade in other festive bakes like my Christmas Baklava that is super easy to make.

Spoon some of this Christmas Pudding Marmalade onto either a round of Camembert or Brie and bake in the oven, then serve with crackers or crusty bread, yum!

Give it as a gift, come on this Christmas Pudding Marmalade just has to be the perfect foodie gift for Christmas.

This recipe makes a great foodie gift, so why not check out my post on how to make Christmas hampers.

Looking for more Christmas preserve recipes to try? Then check these out before you go; 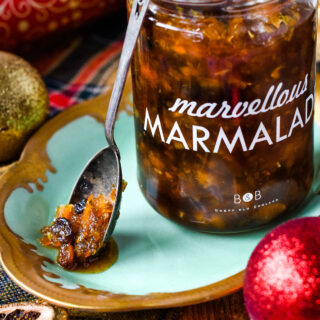 Calories are shown per jar of Christmas pudding marmalade. If you are not using presoaked dried fruit then place in a bowl and add 4tbsp brandy (or tea/orange juice/water or any other booze) and soak 1 hour to plump up. Check out my Jam Making post for full information on testing for setting point etc. Here’s how to sterilise jars properly. This will keep for up to a year in a cool dark place, once opened store in the fridge and use within a month. 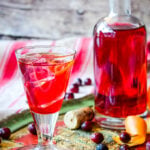 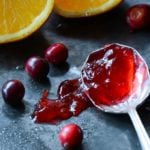 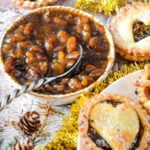 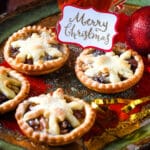 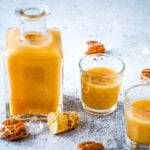 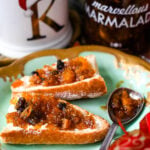 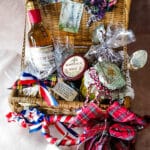 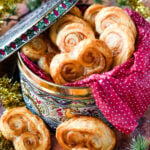 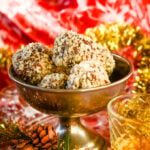 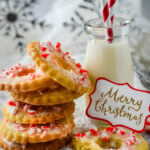