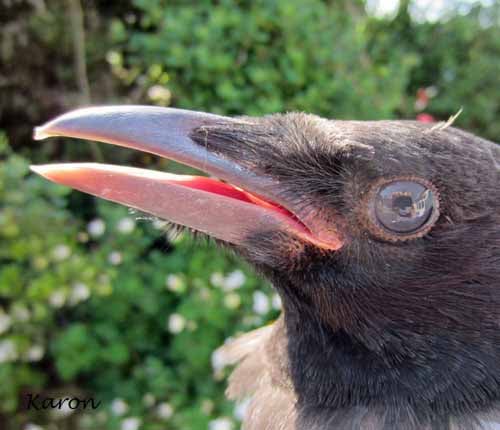 Meet Nigel, oh yes I know, I always seem to name crows Nigel, don’t know the name kind of sits right on a crow somehow. Cedric works well too, but I can’t really see a crow being called Kevin or Steve somehow. Maybe I’m being nameist here, but those monikers just don’t work for me.

Anyway, where was I?  Oh yes, Nigel the crow. Yes here he is in all his glory, not the prettiest or gentlest of faces, a bit beaky (sorry couldn’t resist it) and just a tad beady about the eye. But what the hell, he is a crow and I guess that’s his look.

So why Nigel the crow this morning? Well on Friday Idgy came rushing up to me in the garden (see me slogging away weeding the herb beds) to say she’d found a baby crow who was badly injured.

Off we scampered over the field to find the injured ikkle birdy. Yes I am immediately imagining a cute little baby bird with a few fluffy feathers still showing and a smiley little face (oh God Disney should employ me at this rate) and we come across Nigel.

Well picture the scene dear reader, there he is big and black and angry and with a sore wing and a whole load at bad bird attitude. Then there’s me, nancying about with a tea towel trying to catch him in it. He can’t fly of course,  but he can certainly hop about and lead a merry dance. There is nothing merry about my mood when I eventually grab him in said tea towel and the little bugger bites me on the thumb. 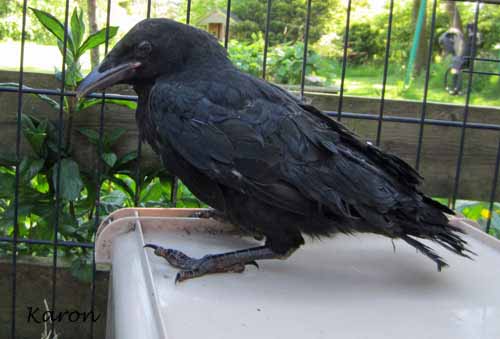 I blame Idgy of course, baby bird my ass, really she ought to get her facts right before she presses me into misguided action like this.

So we capture Nigel and take him home. He is then rehoused in an old dog crate with a hay bed and a nice plastic box to stand on. He immediately  steps in the water bowl and poos on the bird seed.

Now don’t get the idea that I go round the countryside capturing birds in a careless manner and locking them in cages. Oh no, I am no Cruella De ville of the birdy world. far from it, I really would rather not have Nigel as a house guest for the weekend, but his wing looks okay and a couple of days box rest could do the trick.

There follows 2 days of Idgy digging up worms for him and feeding him lovely concoction of cat food, bird seed and wiggly worms. What a delightful mix. Nigel loves it and thrives.

Well yesterday we opened the cage and he hopped out on to the grass. He bounced about a bit, popped up on to the raised bed and flapped his wings. At this point I’d love to report that he turned, smiled and gave us a cheery wave as he flew off into the wide blue yonder  shouting his thanks (did I mention Disney before?). Alas he didn’t, he merely flapped those (now rested and mended) wings and took off. Flew away and left the garden.

Nigel had gone, and so had Idgy when she realised that the disgustingly dirty dog crate was now empty and in need of a hose down and clean. ho hum, guess who got the glamorous job…..

Picture Worth A Million
Pink Cords, Weight And Smiles
The Diet Zone
Back On Track
Share some Larder Love...

email
« How To Make Perfect Pork Parcels
Weedy Ways »
Bakes, Books, Bad Cats and Bandages.....
Welcome To Wonderland
I Love Hank
How To Wear A Weasel