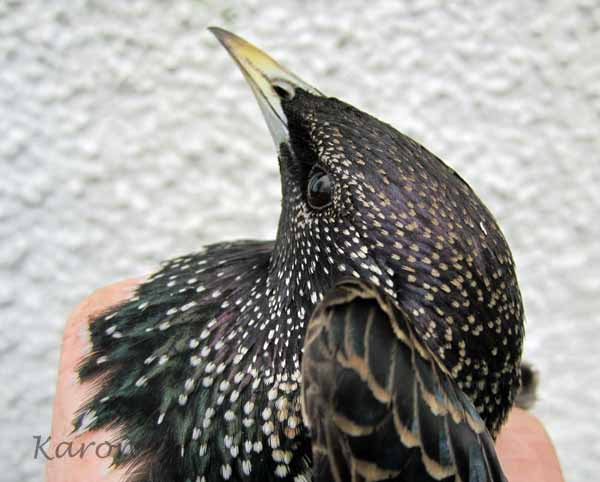 We have an old stove in what was once the diningroom but has long since lost all sense of foodism and become my study. Anyway I call this our Cowboy Stove as it is small with a hot plate on the top and a little window in the front door and stands on tall thin legs a bit like the ones in the old cowboy movies.

Well yesterday morning as I was tapping away doing the blog Minou was bouncing about and climbing all over the stove (unlit for a good while I hasten to add) and generally making a fuss. As fussing is one of her hobbies I was ignoring her and carrying on with my typing. Idgy laughed as she headed out the door saying “That cat is bonkers just look at her now”, I turned to see said cat perched on top of the stove with bum in the air and paws flailing at the little door/window.

Decide to investigate. Now over the years there have been times (probably chronicled in this blog) when a bird has managed to circumnavigate the little Chinese hat thing on top of the chimney and get down into the stove. On these (blessedly rare) occasions one releases the bird and mayhem ensues.

I know this, why oh why oh why did it not cross my tiny little mind as I stupidly opened the stove door. Picture the scene dear reader, I kneel in front of the stove and open the door. Irate and terrified bird flashes past my face. A split second later an enormous furry projectile practically knocks me out as it too flashes past my face with a lot more power, weight and distinct lack of wings.

The bird makes for the living room as does Minou at full speed. I shriek for Idgy to get back in and help. We all race to the livingroom and the bird has a fine old time whizzing round the room at a variety of levels thus causing Minou to do the same. As I have already mentioned the cat has a disadvantage here in that she is not blessed by wings. Minou doesn’t let this hold her back and throws herself round that room as if Red Bull had been injected and the bloody wings had sprouted instantaneously.

Things are falling and being knocked over. I shout and wave my arms about (well I can’t join in with the flying and speed antics so I might as well do something) which strangely enough achieves absolutely nothing.

The bird makes another dash for the window and amazingly gets between the wooden slats on the blind and is encased between glass and blind. Minou throws herself at blind and scales it in great Spiderman style. She can’t get through try as she might and contents herself with manic paw thrusting and loud meowing.

I wish you could have seen this, but we are too busy trying to capture the bird rather than capture the moment.

At last I have come into my own and can do something constructive. Tell Idgy to grab Minou and remove her. This is easier said than done as she (Minou, not Idgy) seems to have acquired glue on all four paws and is apparently welded to the wooden blind.

Minou removed I grapple with hand through blind grasping for the bird who is a tad reluctant to come to me. Idgy reappears and informs me that it is a starling and aren’t its feathers lovely. This is of course what years of Bird Club does for you, robs you of all sense of urgency and instills a ‘let’s admire and take notes’ attitude that is less than useful in these circumstances.

Eventually I manage to grab the bird and with a bit of wriggling get both hand and bird back out through the slats in the blind. 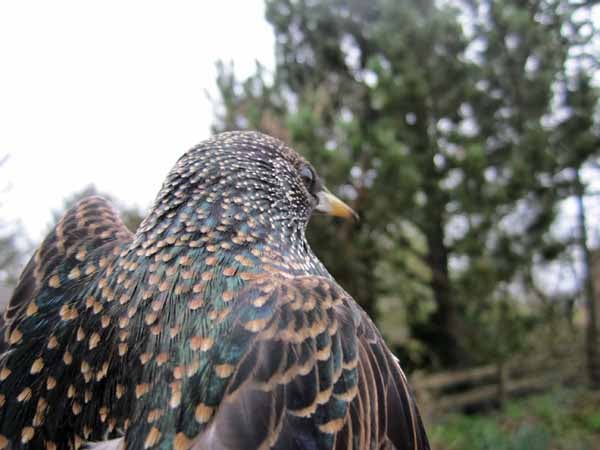 We now have time to check out said bird who looks somewhat deranged but otherwise undamaged and really rather beautiful. Have time to notice the lovely colours Idgy had mentioned earlier.

We take him outside and let him go, first grabbing camera for a couple of snaps.

The school bus hoves into View and Idgy rushes off at high speed still laughing about our adventure.

Back into the house I sort out the mess in the livingroom of knocked over table, magazines and just a dribble of bird poo here and there and then head out to HQ.

It’s about two hours later when I come in again to make a cup of coffee and hear a faint noise coming from the loo. Oh dear that’s where Minou has been. I completely forgot to ask Idgy where she had put her. There is a lot of irate growling and meowing and the lady of the house (the cat) struts into the living room to check things out and see if the bird is still there. Very disappointed to find the place all back to normal again.

She sighs and heads for the sofa to dream about her exploits of the morning…….

Salmon Fishing In The Yemen
Broken Links And Sticky Posts
Last Words
And The Winner Is.....
Share some Larder Love...

email
« First Ten Of The Year
Mother’s Day Wish »
Scooting To The Past
THE ULTIMATE D.I.Y. EBOOK AND ECOURSE BUNDLE NOW AVAILABLE
Bugging off to telly land
The New Video Series, See One For Free Now!