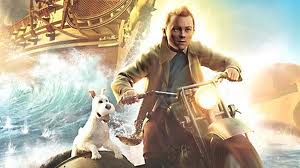 I know, tiny picture, I’m sorry gals, but today I just had to tell you about Tin Tin the movie. Maybe lots of you have seen this already and I’m way behind the times on this one, but for anyone who hasn’t seen it, wow!

I am a big Stephen Spielberg fan anyway, from his first Indiana Jones to some of the more challenging, he is inspirational in what he does. In my humble view Tin Tin is the icing on the cake. The animation is amazing. There is a cross over between the real world and that of the paper in hand comic where the original Tin Tin strutted his stuff many years ago.

Idgy loved it of course. She had seen it in 3D on the big screen a few months back. I was new to this one and a little sceptical about watching it. I really shouldn’t have been. From the very first moment I was captivated.

Everything was so beautifully laid out, the colours and textures, you were inside an old comic book, it was amazing. I loved the characters too. Captain Haddock with his penchant for booze and his Scottish accent, he had some great one-liners more aimed at the adult audience than those of lesser years.

Watching Tin Tin threw me back in the memory dept. Way back in the eighties I used to live and work on a little Greek island. Every day the ferry would come in and bring new tourists to the island.

We would often be found sitting around the harbour side cafes soaking up the sun. One day my friend Ami rushed up to our table and said “You’re not going to believe this but there are 30 Tin Tins on the ferry”. “What?”. We all trooped off to see what was happening, and sure enough there were thirty young guys all dressed exactly like Tin Tin and all with that characteristic quiff hairdo. Now remember this was the early 80s and although the Tin Tin hairdo has been popular with guys for a good few years nowadays, back then it was unheard of. These guys looked way different and all exactly alike.

It turned out that they were a major Tin Tin fan club and this was their annual get together and holiday. They were touring the Greek Islands. They stayed on our little patch of paradise for almost a week. They knew every Tin Tin story. They were mines of uselessly comical information. They were great fun.

So you see watching Tin Tin last night really did do what the great Mr Spielberg so cleverly did with his animation and production – he took the past and brought it to the present. Memories long forgotten whipped up and chatted over, it made Idgy and I both laugh out loud.

By the way, no Pringles were consumed during the viewing of this movie. And Sue I must say there was a nasty moment in Asda when I spotted them at £1 a packet yesterday. Did I load up the basket, did I lunge towards them? I could feel the urge. Could hear their plaintive cries to be released from their foil topped bondage. Did I succumb? No I didn’t! What a proud moment. Well you wouldn’t have lunged for them either if you had a strapping thirteen year old standing ten feet away and hollering “Step away from the Pringles Mother, you know what they’ll do!”.

Ah the joys of parenthood.