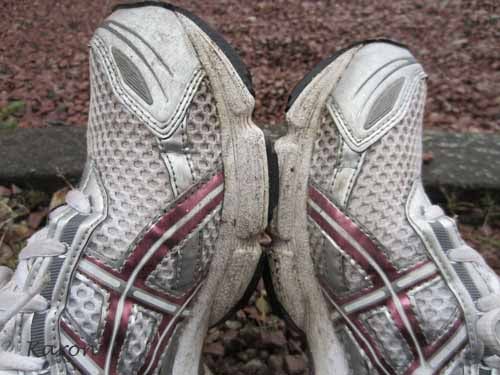 Many of you may have followed me over the summer on my training for The Great Scottish Run and how Bruce and I dragged ourselves round Glasgow one warm and sunny Sunday earlier this month.  We did lots of training with and without the lovely Stella. I did lots of training with fabulous  Phoebe and with the unforgiving and relentless Attila The Run. This was all running stuff and training was outdoors or at one point in the Kelvin Hall in Glasgow.  There was never any talk of a gym.

Now there’s a wod to conjure with. I have to admit here and now that until the other night I was a, ehem Gym Virgin. Yes, yes, I’ve said it, what an admission. I had never actually set foot inside one of these hallowed halls of fitness.

Well until this year I wouldn’t have had the stamina to get over the threshold far less tackle the equipment. I have always had a strong distrust of women in lycra, especially those several decades younger than me in highly fashionable it’s-barely-there-I’m-so-slim-and-trim lycra. Nor am I keen on getting sweaty and red in the face in public (or anywhere for that matter), and then just throw in the whole scary aspect of gyms and fit people and cost and oh all sorts of things.

I had never been to a gym.

Attila dragged me to a gym the other night.

“You’ll love it, it’s a great way to keep fit throughout the winter when you can’t get out to run all the time”. Hmmmmm, I wasn’t convinced. I was even less convinced when he said I was to bring my swimsuit as there was a sauna there too. Oh God there’d be more exposure than the dreaded running kit. And quell horror I hadn’t been using my moisture and tan body lotion since the run in Glasgow a few weeks ago. I was white for God’s sake, and white in a cozzy ain’t a good look when there is a tad more of you than there really should be.

So it was with some trepidation and a nervous smile that I approached the gym.

It was far easier than I thought. The people were mostly normal. Okay so there were a few of those guys that look like they’ve been pumped up with a bicycle pump, you know the type, a skinny vest and muscles that bulge everywhere, oh and usually a tattoo here and there. They do nothing for me but seem to be part and parcel of the whole gym environment. Maybe these guys are built in with the bricks. Maybe it is illegal to open a gym without having these guys lurking around populating the space.

The great thing was that the women were normal. There were none of those Gym Bunnies that have teensy tiny lycra outfits and super tanned bodies . These were normal women of all ages and they were wearing just basic running type gear.

I relaxed enough to be shown the equipment. “Lets have a run” said Attila leading the way towards the treadmills. Well I know how to run for goodness sake, how hard could this be. I leaped on to the machine and made a complete prat of myself when Attila started the thing up and I didn’t quite get my legs into gear fast enough. There was a wobble, a tangle of limbs, a clutching at the handlebars and a lurch to the side. There was hysterical laughter from the horrid Attila. “You don’t have to cling on to the thing, just run”, hmmmm okay for some.

We move on to the things that are meant to tone your arms, definitely something I want. I hold the bar and pull it down, easy peasy, I feel fit already. Attila points out that you’re meant to add weights to this machine. He adds the weights, the bar shoots upwards and I go with it. “You’re meant to pull it down, not follow it up”.

I try leg lifts and then head for the cycles. Now this I can do. I settle into a pretty good cycle run while watching some bimbo singing on a telly screen in front of me. How easy is this! Attila finishes his latest bicep pushing mission and comes over to say we should head for the sauna. Thrilled at the prospect of stopping all this activity I stop peddling and leap off the bike. Unfortunately I have omitted to remove my feet from the safety pedals. My leap of body is not followed by any sort of movement in the feet. I collapse sideways in an undignified heap.

On to the sauna and the dreaded cozzy. Well actually it was a breeze, the best part of the evening. I imagined I was on that Seychelles beach I so often dream about. The air was hot and still and I could almost feel the sand beneath my feet. It was the perfect ending to my introduction to the dreaded gym.

I survived the gym. I may not have done it with any great dignity (do I ever do anything that truly captures that elusive D word?) but what the heck,  I’m thinking of joining. I’ll never join the ranks of those gym bunnies out there, but I’ll have a go and at least it will keep me fit throughout the winter and keep those trainers from gathering dust in the bedroom.

Have you joined a gym, oh I hope someone else has made a pratt of themselves on these machines too…..

email
« Is Now Good For You?
Water Ways »
Up With The Lark
Why Blogging?
The Slippery Slope
Scotland The Beautiful