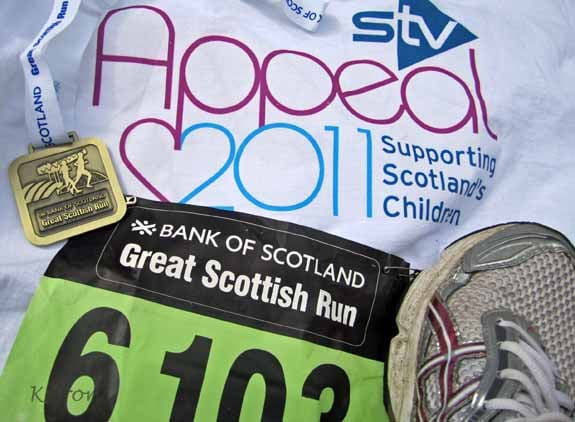 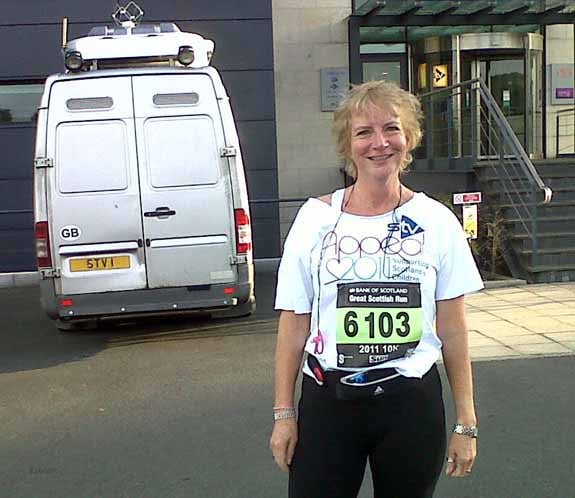 It didn’t actually look like I’d make it at all, as on Friday and Saturday  I was completely floored by Idgy’s cold (bless her for sharing). But many a herb tea, lemon juice, toddy  and honey later I found myself at 8am meeting Bruce outside the studios. Don’t I look keen, eager and awake! Note the hacked about T shirt and lack of bandit style bum bag. Yes gang, I’m happy to report we had a sudden shift in fortunes on the bum bag front and bought this neat little gizmo on Saturday morning.  You will also note the little red thing on the belt, that’s Idgy’s Pokewalker that counts your steps to wins you Ws to use in the games (oh come on, don’t ask me I haven’t a clue), anyway I was to wear this thing in the hope that I would do lots of steps and win the Ws for her – oh I feel so used! 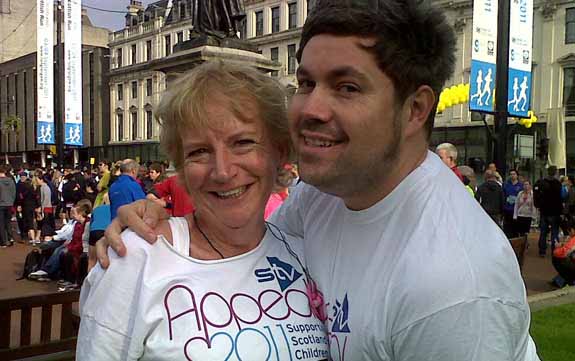 This is us in George Square before the race started. Actually it is before even Stella appears and puts us through our stretching and pre race warm up. Have to say this is so embarrassing, picture the scene, 5 of us and Stella (she who will be obeyed and looks good in lycra) and the camera man taking up pole position on grassy part of the square with all these thousands of people standing around waiting to start with nothing better to do than watch s leaping about like a gang of gorillas on speed. I’m sure Stella put in those ballet side steps just as an cringe worthy extra. 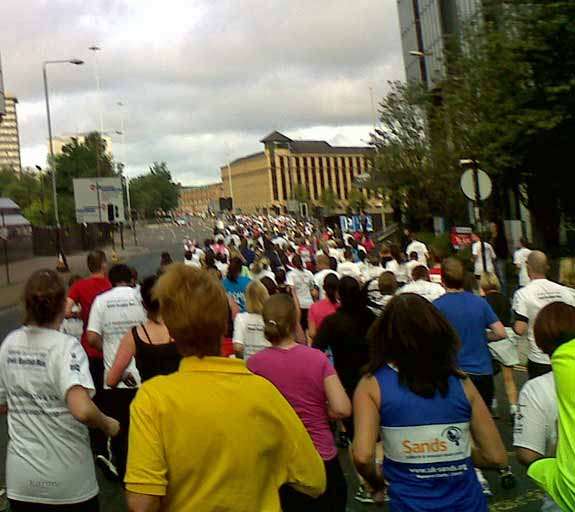 This is it, we are off and running. Thankfully the weather was kind to us as it had been raining on the Saturday and then it started again on Sunday night, but Sunday itself was a joy.

So many people  and such a great atmosphere, a real buzz in the air. I hadn’t expected the atmosphere, it was inspiring. 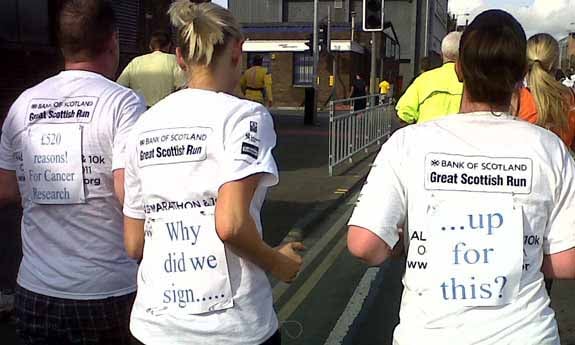 People are running for so many different causes. They are all out there doing their bit and it really draws you in and makes you feel part of it all, really involved.

Stella had warned us that the 6-8k mark is when you really flag and get tired. They have the distance markers all along the route, some with a piper, some with a band, one with a giant Tigger Tiger, one with giant blow up Scotsmen. There are crowds lining the streets at start and finish and in the shopping streets between. Our route takes us over the Kingston Bridge on the motorway, looping off into all sorts of areas I don’t know, into beautiful roads with big impressive houses, then into busy shopping streets, industrial areas and more houses.

It goes past in a blur of well wishers and Bruce and I maintaining race tactics (get round) and Perfect Positioning (me on his right and headphones on outer ears so inner ears free next to eachother for chat) and Bruce being in charge of STV’s mini cam and getting shots for telly throughout the race. Do hope they don’t use the bit where Bruce taught me how to swill and spit like a real athlete, so undignified!

We are not fast, this is not the pace I use with Attila, this is a comfortable, steady sort of endurance type pace. It works, we don’t get tired at the dreaded 6-8k mark, we just keep ploughing on.

We plough on popping our Magic Beans (obviously they will make wings sprout on our trainers and fairly carry us home) – aka energy candy- and just keep chatting. I’ll be honest here, I could never have done this if I had run alone. It was the chat and laughter and fooling around that made it possible. We were a mini team and that’s how we did it. 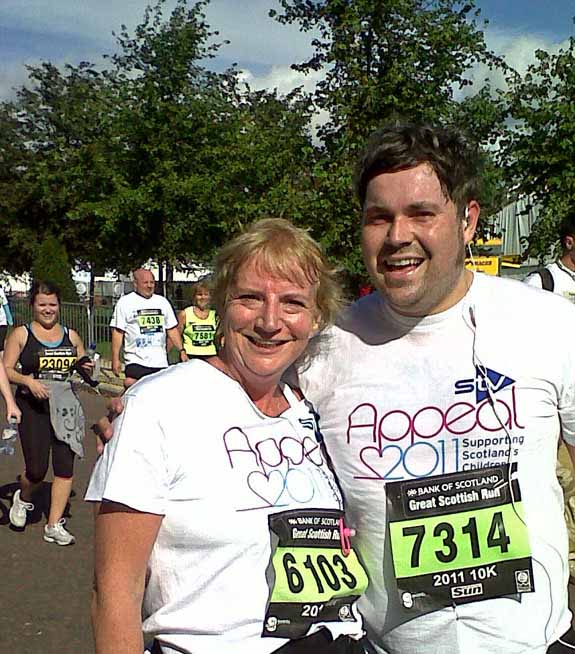 Not pretty I know, but what the hell, I’ll show you anyway –  this is the Sweat Shot as we cross the line. Sun in the eyes, red in the face and sweat on the brow, back, face, entire body (SO unladylike). We’ve done it!! 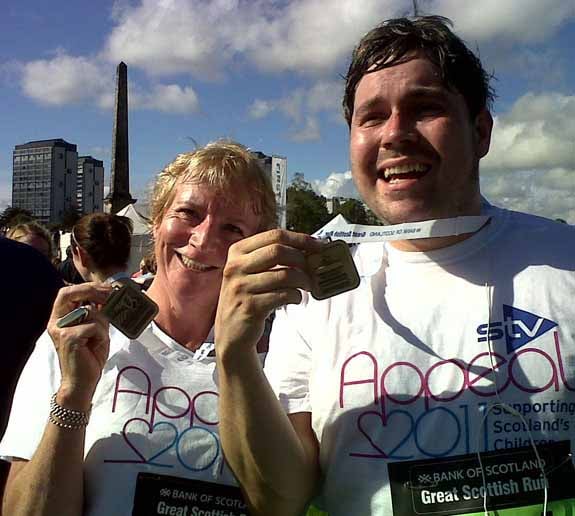 And here’s the Medal Shot taken a couple of minutes later. You get over the line and are handed a medal, a banana and a goodie bag in that order.  Resist temptation to madly munch the medal and wear the banana, losing plot with all that adreniline. 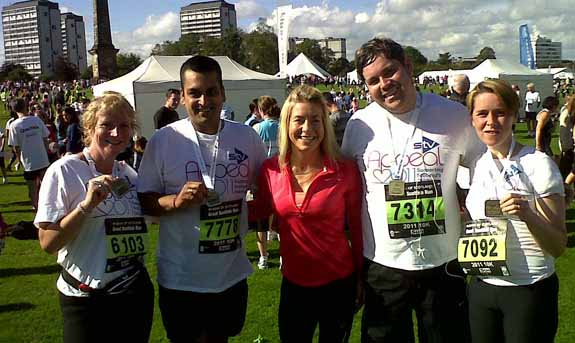 So here we are, the end of the run. The end of our 3 months of training. Nick is missing from the line up as he had to rush off, but this is what is left from the starting group 3 months ago. Dropped off like flies all of them. This is us, and we hung on and did it. D’you know something, it felt really good.

I’ve so enjoyed this summer of running, made new friends , got fit, lost weight, done something for charity and done something for myself too. I never thought I could run 10k, never really had it up there on the want list, never wanted to be part of a thing like that, an en mass charity run, but it was good, every minute of it.  So here is the THANK YOUS, to Stella (she who shall be obeyed and looks good in lycra), your running clubs (Hell Club) kept us going (and moaning) and your determination and encouragement to a group of total beginers (Bruce and I at least) was unstinting, to Attila The Run for dragging me round that amazing 10k practice and all the other runs in between, for encouragement and laughter and ‘get a grip’ talks, to STV for bringing us together and making this happen, to you dear readers for giving me your support and encouragement and money in donations/sponsorship (by the way you can still click that button and add more, every penny counts), and to Bruce, I know I wouldn’t have got round without him.

By the way the Pokewalker registered 26025 steps by the end of the day. Idgy was thrilled.