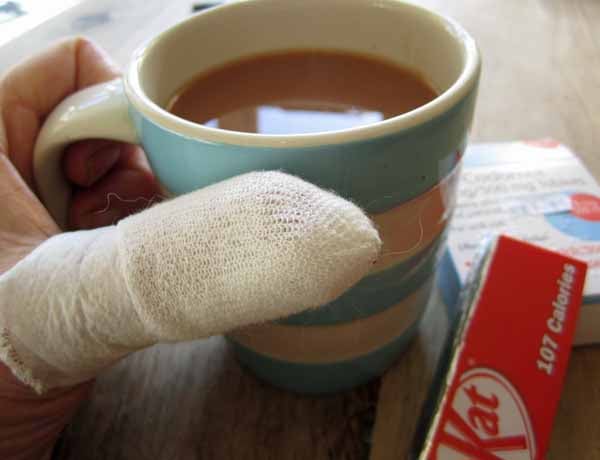 You know how we (responsible adults that we profess to be!) always warn children of the dangers that life has on offer. Don’t rush on to the road, don’t touch hot objects, don’t play with sharp things like scissors. I wonder why we do that? Is it because it is only sensible to warn children not to do these things, of course it is. So why does the same rule not apply to me I wonder.

Yesterday I was being all creative in HQ. There I was giving my all to an angel (no don’t ask, please don’t ask) and trying to stick a wire into its head. The wire wouldn’t go in. Now the best possible tool for a job such as this would be a small drill. I have such a tool, f course I do. Alas said tool was in the tool box on a shelf in the store room, I on the other hand was in a chair by the work table, nice and comfy and in no great rush to get up, move across the room and go get the drill. Oh no, it would be far quicker and easier (read lazier here) to grab the scissors and stab those into the solid head shape to make a hole for the reluctant wire.

Now anyone who has ever tried to do anything with a roundish object will know that it doesn’t sit straight in your hand, maybe even has a tendancy to slip about a bit. Well picture the scene dear reader, there I am scissors in hand, angel head in the other and a big hard thrust (good word that, powerful, dramatic – sore) sends the scissors skyting (this is a Scottish term for missing completely but sort of bouncing off in nasty fast sliding motion) right over the top of the head thingy and into my thumb. Not just slightly in, but right in.

There was a moment when I just sat there and looked at it and then the blood was everywhere. Did I panic, well surprisingly no. I grabbed the thumb with other hand and rushed to the house. Hand under cold tap. Numb the thumb. Throbbing pain. Sink full of reddish pink water. Not inspiring, not good.

Scuttle upstairs to bathroom and grab vintage first aid tin (style at all times, even in crisis!), I know there is a packet of paper stitches in there. Aha there’s the box. The box is empty and I remember that the last of the stitches were pressed into service to stick a dinosaurs leg back on (no, no not THAT long ago, a plastic dinosaur a few years ago) and never beenn replaced.

Make do with wrapping thumb in kitchen roll and head back out to HQ. Carry on working (what a trooper eh!) but decide to abandon the bloody angel and do some glitter work. Am gluing glitter to pile of snowballs and thinking that my kitchen roll bandage is pretty fabby when I notice that the pile of snowballs awaiting glitter has turned red. The kitchen roll looks fine on one side but not on the other. Unwrap to assess damage. BIG mistake, huge. Deluge of red stuff everywhere. Decide this really is no time for bravery and should get held.

Leap into Tigger and drive (one handed) to village ten mins away to Doctor’s surgery. Appear at door blood splattered and clutching very soggy hand. “You’ll be wanting a stitch in that” says the receptionist as I lean against her pristine white desk.

Am whisked off to get stitched up and Doctor looks at both hands to check the swelling. Thumb is a strange shade of blue and enormous. Now keen readers will recall that they always see two silver rings on my left thumb, I never take them off. “We’ll have to get those rings off” are his first words to me. I have horrible visions of them having to be cut off so tell him to do whatever to just pull them off. Oh boy how I wish I hadn’t said that, I nearly shot out the window.

Anyway I am stitched up and informed that the colourful hue is due to the bruising I caused by the force of the scissor thrust. “Lucky you didn’t do more damage there, this’ll be sore for a while”. He hands me some pain killers and then asks if I’ve had a tetanus booster recently. Can’t remember so he feels it’s only fair to add insult to injury and stab me with a bloody great needle too.

Leave the surgery with cartoon character hand and much laughter from the staff about children playing with scissors etc and being told to keep the hand up and don’t use it for 24 hours to let it knit together.

Go home and collapse on sofa armed with tea and biscuit feeling slightly silly and somewhat sorry for self. Feel even more sorry when first pain killers wear off and throbbing has me whimpering like a puppy.

Idgy arrives home from school and takes one look at me, “Oh Mum, what have you done This time?”, feel about five years old.

Now the moral of this tale, well quite simply don’t try to stab an angels head with scissors, don’t mend dinosaurs with the only paper stitches in the house, don’t use kitchen roll as a bandage, oh and don’t be so bloody silly next time………

And The Winner Is...
Crafters At Christmas
Stepping Into The New Year
Spring Sort Out For HQ
Share some Larder Love...