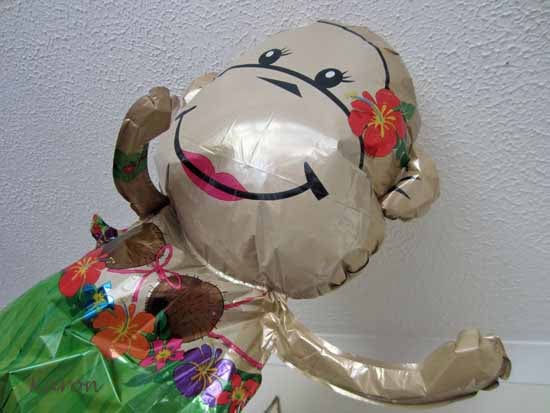 The dreadful Birthday Monkey is still with us. This tasteless creature was bought for Idgy’s birthday party on 28th May. 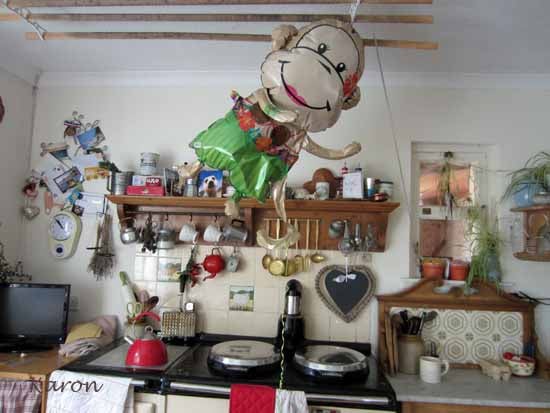 Quite frankly I am beginning to loath the monkey, it seems to smirk knowingly from its position above. It hovers over the Aga, then moves with sedate pace to the other side of the room where it lurks menacingly above the archway to the mud room. Here it lies in wait with trailing ribbon ready to garrote the unwary as they head for the loo.

Why don’t I just kill the monkey, grab it by it’s now floppy tail and just burst the damn thing.

Somehow I can’t, she has become part of the kitchen. She is a talking point when anyone pops in. She has almost become a character in the play of our lives. Oh isn’t this worrying, a blow up monkey part of the family, whatever next – whoops, lets not even go there ladies!

So there she is, still bobbing about. “How’s the monkey?” asked Idgy when she got home on Monday. Yes, the monkey stays until she falls to the ground in a silent and flacid heap. In a strange way she will then be missed, now she is just a hovering obstacle with evil intent.

Maybe we should have bought the inflatable cocktail glass, now that would have been a statement in the kitchen!

For Hank
Her Adventure Begins.....
The Gym Virgin
Construction, Destruction,Detox and Books!
Share some Larder Love...

email
« How To Infuse Your Own Oils With Herbs
Fly Your Flag »
A Wee Dream
Sheepish Moments
That Special Love
Christmas Comes Next Week!