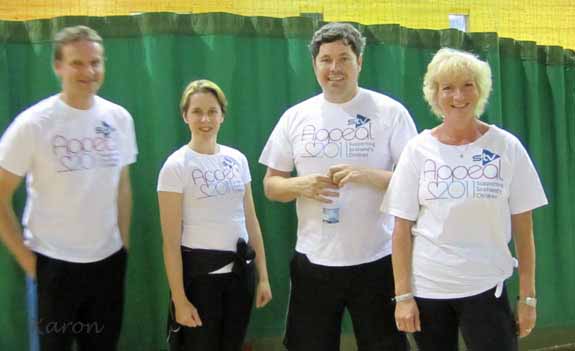 Friday was our final coaching day for the Great Scottish Run that we are doing with Scottish Television for their Children’s Charity Appeal next month. Four of us fit and hearty athletes (!!!) met up with Stella and the crew at the famous Kelvin Hall in Glasgow for a spot of gentle (huh!) training and a wee bit of filming.

Alas Phoebe and several others couldn’t make it, so our group was down to Nick the florist, Doctor Debbie, the lovely Bruce and yours truly. This is us when we just arrived. You’ll see what we looked like during and after the event when the programme airs on telly this Friday. What a happy smiling and unsuspecting bunch we are. 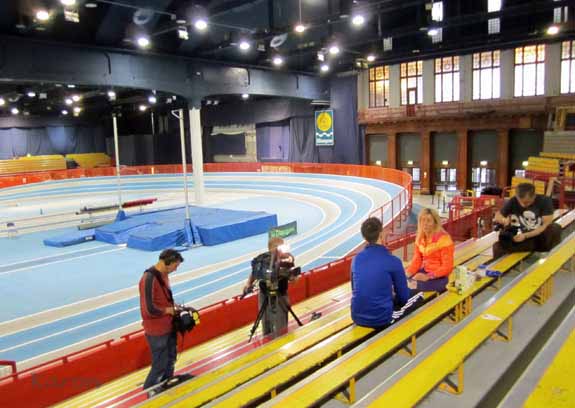 To say it was grueling would be something of an understatement. Let me just say I have been walking like John Wayne all weekend and still can’t get downstairs without mincing sideways!

Stella had us doing dynamic leg work – really my legs have never been remotely dynamic and have no interest in becoming so – which involved some horrible lunges, very undignified squats and then the same things but leaping about doing them. Urrghhh, it was nasty, it was sweaty, it was seriously hard work. None of us shone, some of us even fell over.

Next we were allowed on to the hallowed racetrack where many a famous althletic foot has trod. We were to display our running form, do short bursts at ‘a good speed’ (listen, anything over a walk is a good speed to me) and keep doing this again and again.

Now let me just mention that this is all being filmed and nothing ever goes smoothly or to plan when there is a crew and cameras involved. Of course there will be people who pop into shot that shouldn’t be there (funnily enough usually waving in a casual manner), the sound will be off whenever a pipe band strikes up (yes, yes, it’s Scotland these things happen), and then of course there are all the usual bloopers and glitches that happen as per norm. This means one thing and one thing only to the four of us…..

It means we have to keep doing the same thing over and over again.

The novelty (what novelty, where?) wears off fast. 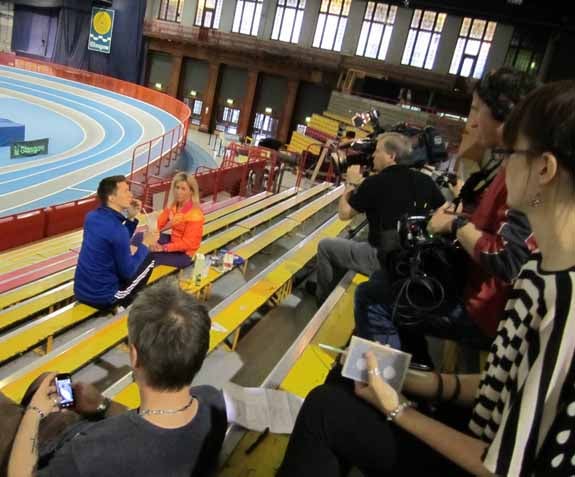 With the demise of any novelty or fun factor it is just downright tiring and gets more so as the afternoon stretches into evening. We are each interviewed by Saen and try to sound at least human if not slightly witty when questioned about our training or lack thereof.

Then it’s crunch time. Oh yes, it gets worse dear reader. She who shall be obeyed (Stella) tells us we have to run a full 1k at our best speed. That is 5 laps of this running track. Bruce and I eye the track, we eye each other and burst out laughing yet again. This is SO not happening.

We do it, we get through it and we do all the extra takes to finish things off. What a day!

I then drove on to Stirling to stay with Rosemary for the weekend (more on that tomorrow) and gave her a great laugh when the next morning I had to bump down the stairs on my bum as my legs were so sore.

Ah the joys of being an athlete – not!!