According to the TV and radio yesterday was the ultimate day for the blues, in fact the 18th of January is apparently the most depressing day of the year.

You are broke after Christmas and all those dreaded credit card bills are coming in, the weather is horrid, you've faided on those silly resolutions and you are just a tad overweight from all the mince pies. Sound familiar, well seemingly it is a well known date for sadness.

Not for me it wasn't, I played hooky and trotted off to the cinema in the afternoon. Felt justified that I had done all my housey chores in the morning (yes, even defrosting the freezer – what a woman!) and got some work done on the new line, I was up to date on the home/work front. 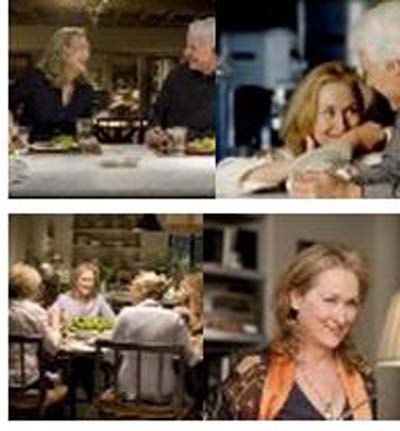 I am SO glad I did this, I don't think I have laughed so much in months. This is a seriously funny film. My favourite actress Meryl Streep plays her part perfectly. She is the divorced woman with grown up kids, successful business and no man. Enter the ex husband who is married to a bimbo, you guessed it, they end up having an affair. As ever with a rom com nothing is as it seems, nothing is simple.

It reminded me of those great old Doris Day films of the fifty's. Entertainment all the way.

Now on the age front, I have to say Ms Streep is the ultimate woman to me, a hugely successful actress and she looks amazing for her age. She has played the most amazing parts over the years, from serious stuff in Sophie's Choice right up to silliness and singing in Momma Mia a couple of years ago. I have to say she is definitely my favourite actress.

Who is your favourite actress?

Would definitely recommend 'It's complicated'  for a bit of all out escapism and downright fun. So the 18th January wasn't depressing for me at all, I laughed my way through it.

email
« I LOVE YOU
D – DAY COMMETH »
How To Save Money At Home
How To Wear A Weasel
Jubilee Giveaway!
I am not a real Food Blogger