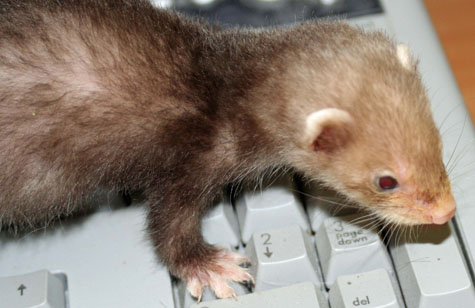 Well it was a good enough opening line for David Copperfield, so why not for me. I am after all a really rather fabulous ferret and as such deserve only the best in introductions.

Actually let’s get things straight right from the start, I am a Polecat Ferret and a Silver Mitt at that. For those uninitiated in the wondrous knowledge of ferretdom, let me explain that I have beautifully pale almost silvery (yeah get the name now!) paws.

I was born in 2006 in May of that year. Do I remember my birth? Er no not really, and there ain’t no way I’m going into all that re-birthing stuff just to tell you guys about it, just take my word for it, I was born. Mum and Dad were your average working ferrets. Dad was a major hunting bloke and went out to work at least once a week. Mum used to hunt for a living but after reaching ‘a certain age’ she retired to domesticity and rearing us young’uns. I look a bit like my Dad, he was the same polecat colourway but had black feet. He was a big guy, a lot bigger than I am now, actually he was a bit of a bruiser of a ferret, very macho. Mum was an albino in colour and had the loveliest pink eyes, bet you can’t say that about your Mum!

I was part of a litter of 8. Yeugh don’t you just hate that word, a ‘litter’, makes us sound like rubbish doesn’t it. But let me tell you, we ferrets are far from rubbish, we are fabulous.

Anyway back to my brothers and sisters. As I said, there was a group of 8 of us. I remember Jack and Lizzie pretty well because they came to stay with me some time later (more on that to follow) but can’t really remember much about the others. There was a bit of scuffling and in-fighting tho. Come on, boys will be boys and all that stuff.

The young boy that owned us decided it was time to re-home us at 8 weeks old as the fighting and scrapping was getting a wee bit out of hand. I blame by big bully brother Bob (see I remembered him), boy did he have a set of gnashers on him.

I was pretty small for my age. When The Boss (she who thinks she should be obeyed but rarely is, she who brought me to this place where I now live, she in fact who writes this blog I am commandeering, she who likes to think she is my boss but hasn’t a hope in hell…) came with Idgy (her lovely daughter and my bestest friend) to meet me she was impressed with my colouring. Not only do I have these rather cute silver mitts, I also sport an apricot patch on my chest, very fetching if I say so myself.

It is unfortunate that the silly woman dropped me as she took me from the cage. I mean come on, she only had to lift me round the tummy, what a klutz! Anyway that might have tipped the scales even more in my favour as I guess she felt guilty at dropping this poor creature on the ground.

They decided to call me Harry, actually my full name is Harry Potter Grieve. It could have been worse, they did want to call me Ron Weasly. Amazing how they think that’s funny, humans huh!

The deal was struck. I had a new home. They had brought a cat box to transport me in. What a joke, I measured a delicate 7 inches (including tail) so cat box was a bit like chucking a peanut into a bucket. The young boy gave them a shoebox for me instead.

Boy do I know how to travel in style!

email
« Last Of The Summer……
The Enchanted Forest »
It's Real, It's Running and It's on TV
Happy New Year
Really Super Market Flowers
Book Giveaway Winner.....