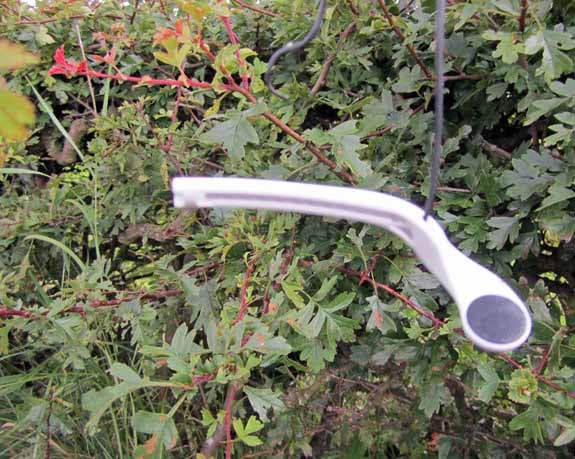 Sometimes I do the dumbest things.

The other morning I set off for a run. Wasn’t really in the mood to run – no, let’s be honest here Karon, couldn’t give a toss about running and just didn’t want to do it.  Are we detecting just a little bit of a bad mood here? Hmm yes, ‘fraid so.

Anyway I set off from the gate and only got about half way up the incline to the crossroads when it started to spit with rain. “That’s it, I’ve had enough” I thought. “I’m sick of this rain and sick of this running”.

I pulled my headphones off. Well I tried to, alas they were caught in my hair. I yanked them off and in so doing they snapped. Not only did the damn things snap but as they flew off they managed to yank my ipod Nano off my t-shirt and it flew through the air. I turned and saw it landing in the long grass at the side of the lane. I turned back to disentangle myself from the damn headphones and then went back for the ipod.

Where was the ipod? Where had it gone?

Major search for ipod. Neighbours driving to work stop to help. Old farmer from down the road clambers out of his truck and roots in the bushes along with us. Another jogger arrives. We are by now a cohesive group. We are searchers. We are all face down, butt up in the hedgerow. 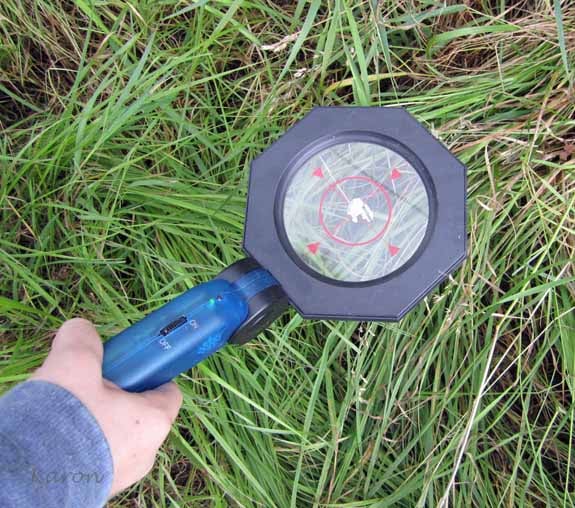 John the farmer (another one, there’s a lot of these farming types about in these parts) has a metal detector.  Collect said item and wrestle with the workings of something that squeaks at you. Hate things that squeak at you. This one then stops squeaking and resolutely refuses to squeak again. 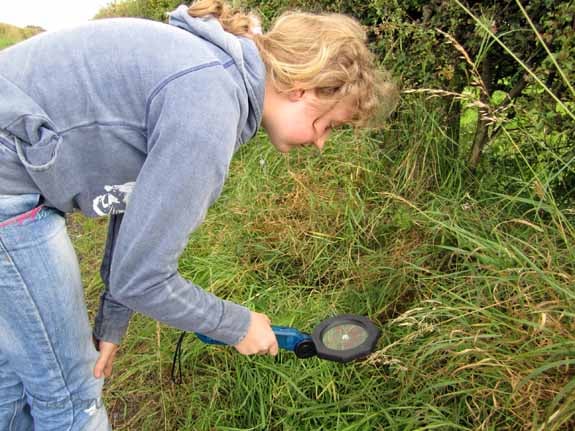 Idgy joins the search and commandeers the metal detector.

“I’ll find it” says our budding Sherlock Holmes. Maybe it is the £10 reward that urges her on and boosts the enthusiasm. Everyone has maintained that we are bound to find it. After all I saw it fall and I hung the broken headphones in the hedge to mark the area I thought it was in (see top pic, yes there is a reason for the danging ornament in the hedge, and no it’s not something arty for my forthcoming Christmas book). Did I mention that the grass was long. By long I mean 2 feet tall? I didn’t mention the long grass, silly me. Let me say it again – the grass was l o n g. Yes another little glitch to contend with.

We did not find the ipod. Who would think it could disapear into thin air like that in such a limited area. It vanished.

Now kiddies, what have I learned from this incident?

Don’t get so stressy and bad tempered that you rip off your headphones and in so doing lose the bloody ipod.

Hmmmmmm, gotcha. Won’t be doing that one again. Can’t really, haven’t got an ipod now………

PS If you are in Scotland today check out STV television at 5.50pm. They are showing the prog they made last Friday about our training. I dread to think.

email
« Exciting News And Movie Magic
It’s Real, It’s Running and It’s on TV »
Animal Antics And The Way We Are
They steal Pringles don't they?
Simply Scottish Cakes & Bakes Coming Soon!
Picture Worth A Million