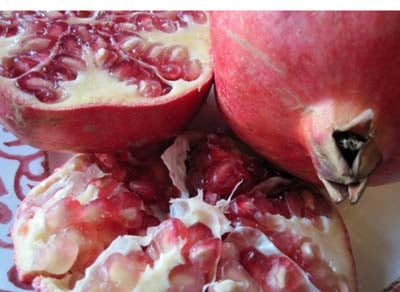 Far more than the satsumas (and what self respecting stocking would be without one) the fruit that says Christmas to me is the pomegranate.When I was a little girl (way back in the depths of time here) pomegranates were a real treat, a rarity that only 'came out' at this time of year. I remember the excitement of trying this fruit for the first time. How could such an unpromising item hold such excitement within? Those delightful tiny jewels like rubies, so juicy, so sweet, and oh just SO much fun to dig out on a pin and eat one by one. 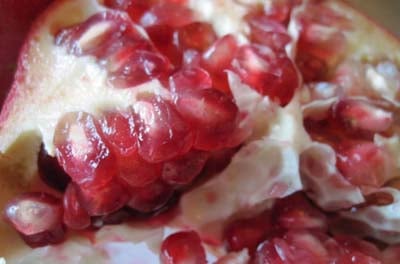 November was the time that the local green grocer would proudly put up a sign to tell the town that pomegranates were ready. My poor mother would be badgered to buy them. My brother and I would have races to see who could guzzle through the jewels fastest, but only of course eating them one at a time.

Pomegranates also take me  back to a favourite book of teenage years. 'My brother Michael' by Scottish author Mary Stewart. Set in the ancient village of Delphi in Southern Greece, it is a romance and a thriller all at the same time. Our heroine finds hidden statues in the mountains, dastardly baddies who cause mayhem, and of course love in the form of a rather nice Englishman. Anyway, at one point she is sitting at the top of the amphi theatre in Delphi in the moonlight (as you do) and the very charming Englishman picks her a pomegranate from the little tree right at the top. he hands it to her and tells her that there is a Greek legend that says if she eats the pomegranate in the place that it grows she will always come back to Greece. 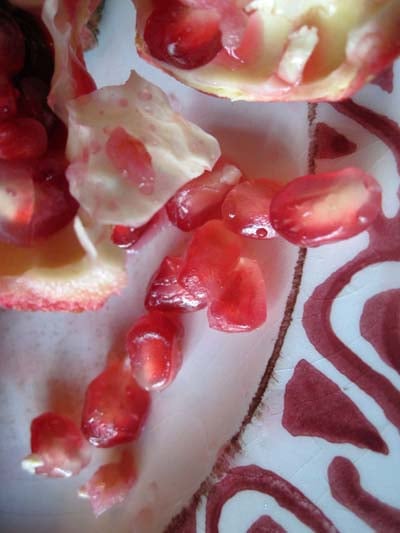 Well, I loved that book (and all the Mary Stewart novels) and when I was a mere seventeen I took a bus all the way to Greece with my friend Alison. I had 'My brother Michael' in my rucksack and I was determined to go to Delphi. We did, on the ricketyest old village bus terrifying us as it swooped round the hairpin bends on the mountains, and finally dropping us at a little Greek village that saw thousands of tourists every day to see the fabulous ruins, but rarely had them stay more than a night. We stayed a week, we loved it. Everything was set out just as Mary described in her book, okay, so there were no baddies lurking in the bushes, and maybe the romantic situations were a bit thin on the ground, but wow, it was as if we were inside the book itself. Her descriptive writing was so detailed, so accurate, it was like a map, it was wonderful.

We walked round the ruins many times, we went at night (just as the heroine did) which I don't think you would ever be able to do nowadays. We went to the amphi theatre, I sat on the top row of seats, I saw the little pomegranate tree, and yes, you guessed it, I pinched one and ate it right away.

Did it go back to Greece? Oh yes, I ended up working there for five years for different holiday companies. I loved Greece and her islands. That love first sprang from Mary Stewart and 'My brother Michael', the village of Delphi in the mountains, and oh yes, I am sure that pomegranite really did have something to do with it.

Suprise yourself
Construction, Destruction,Detox and Books!
White Christmas And Fab Friends
That Time Of Year Again
Share some Larder Love...