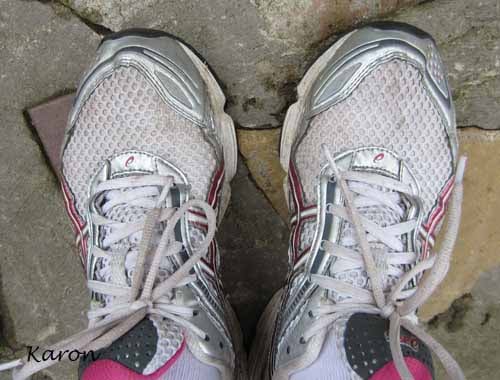 Running tonight, being dragged out by the dreaded Attila The Run for first run of the year, So not looking forward to this.

As I’ve said, it really has got to be done. Clothes not fitting and all that. Having had quite a busy week of being out and about I have had to dress slightly better than I normally do in the house. This of course means delving into the wardrobe and rather stupidly assuming that everything still fits perfectly when you know damn well that basking on the sofa armed with Chardonnay and Pringles does not a sylph like maiden make.

I was okay on Sunday for our flight down to Birmingham. Got the smartish casual look down pat and even managed to pull off that difficult outdoors/indoors combo of wearing a jacket and not either sweltering or freezing or carrying the damn thing around all day. I was rather proud of myself.

Obviously this went to my head as when I headed off for Glasgow on Tuesday and it was pouring with rain I rather missed the mark fashion-wise. As it was raining and I knew I’d be marching about in town I thought jeans, boots and long coat would be a good choice. It would have been a good choice if my long coat (read only coat) wasn’t quite so long and flappy. Rain in Scotland (especially here in the west) usually comes with a friend, Mr Wind, or his delightful girlfriend Gusty Gale. My long (overly so) coat was just the thing not to wear in the windy city. I almost took off like a kite and I’m quite sure passers by were not impressed as my sheets of canvas slapped at their legs like sails on an errant pirate ship.

You can also add to that the fact that even tho it was raining where I live, in the city itself it was dry. Ergo I looked a complete prat in my head to toe dry-s-a-bone gear and was sweating like the proverbial porker by lunch time.

Yesterday I had a meeting in town and decided that all was well as this was a jump in and out of car event and so no nasty coat required. Jackets I can cope with. The problem was that I decided to wear a dress. Nothing over the top, not a ball gown or anything, just a simple dress.

All went well until I stepped lightly (gazelle like of course) from the car outside the office in question and noticed that the weather was a tad blowy (yes dear Gusty Gale was out again). I realised just how windy it was when my dress flew up to waist level and my scarf took a vertical impulse and turned into a miniature tornado with my head inside. Couldn’t see a damn thing, knew (and felt) lower parts being exposed to the world at large and was generally in a flap.

Did I panic dear reader?

By the time I had managed to capture the scarf and see what was happening, grab the dress and pull it down whilst still clutching scarf/bag and folder combo with other hand and kick Tigger’s door shut, I was well and truly flustered, red in the face and yes, sweating like a porker again.

Sartorial elegance is obviously not for me.

Running tonight, oh yes it has gotta-be-done, at least if I get some weight off there will be less of me to expose when encountering my usual fashion faux pas.

PS I’m guest blogging over at the fabulous Mabel’s Log today, go take a look, you will love this site.

White Christmas And Fab Friends
Greek Olives And Honey
Foot Fetish
And The Winner Is.......
Share some Larder Love...

email
« A Walk On The Town
How To Amaze Yourself »
Let's Mingle!
Spring Snow
Time Out
A Toast To Toast