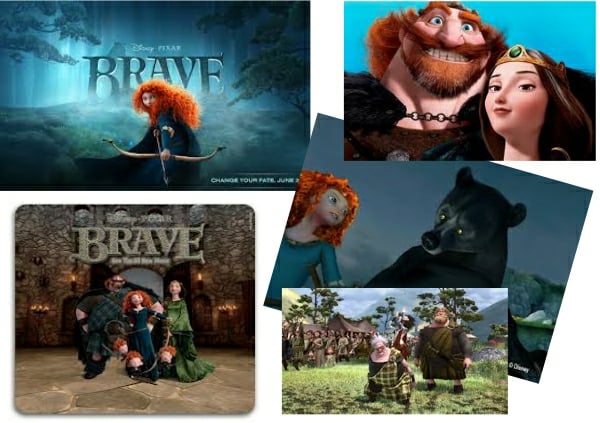 The keen reader (oh please let there be a keen reader out there!) will remember that I am not the biggest fan of animated films. Okay I loved Toy Story, I laughed, I cried and I have a soft spot for Tom Hanks anyway, but most of the modern day animation leaves me not just cold, but somewhat frozen.

So when Idgy kept going on and on about going to see the new offering from Disney/Pixar called Brave I was less than enthusiastic. She knows me well my girl and put forward the case like this;

You hate Japanese type cartoon style animation due to your snobbishness and hang up on lovely old Disney work. This one is like Disney of old.

You hate anything spacey, weird or with characters that have two heads, green scaly skin, robotic eyebrows and an ability to mutate from a car to a robot etc. This one doesn’t have that.

You hate anything that is full of loud bangs and explosions and general noise as it wakes you up should you inadvertently have fallen asleep during the first half hour of the film (who me?). This has low noise level.

You hate ugly industrial and dark backgrounds in films and whine that they are depressing. This is set in Scotland and shows beautiful countryside.

You hate cutesy characters with squeaky voices. This has Billy Connelly who has never squeaked in his life.

Well after all that I couldn’t really come up with a reason why not to go, so we did.

It was great. The animation was so incredibly realistic you fell into the cosy trap of actually thinking it was all real. The characters became people, and the voices, oh what can I say. You could step outside the cinema and hear every one of those voices and accents within five minutes. The phrases like “Help ma boab” and “Get away way yea” were straight from the streets. How they are taken in other countries I don’t know, but here they are just normality and it was great to hear them in a big movie like this.

I didn’t fall asleep. I didn’t even have the prop of a large cappucino to keep me awake ewither. Now come on this is a first!

The story is simple. Young girl (Princess of course, remember this is a movie) doesn’t want to follow convention, do what her mother wants and have to get married. She finds a witch (like you do) who offers her a spell. Her wish is that her mother should change and by doing so this would change her life. Well the witch changes her mother into a bear (now come on how many of us mothers really do change into bears when under pressure? Do you change into a bear? I do) which of course isn’t terribly convenient especially when the father is somewhat anti-bear having had his leg bitten off by one. So you can see where this is going can’t you. She has to change Mum back and in so doing realises that you can’t change other people to make your dreams come true it is all within you etc, etc…..

I won’t drag on about all the adventure stuff that fills the film, go see it and enjoy.

I was in there and transported and laughed with the rest of the crowd.

“See, not all animation is rubbish Mum, you enjoyed that didn’t you?”. “Yes” I agree but add after a second or two “Don’t even think of dragging me to a Transformers film or I really will turn into a bear”.