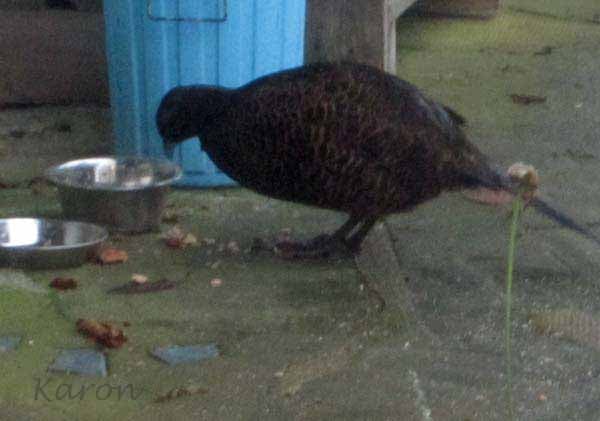 Meet Winter Pheasant.  Idgy named her this as although she lives in the wilderness at the bottom of the garden in other seasons, the minute the clocks go back she is up at the house and moves in to the old rabbit hutch that Harry was once meant to live in. So she is Winter Pheasant.

Excuse the fuzzy photo but she is a shy lady and I had to snap this through the kitchen window early in the morning when she was pinching breakfast from HatCat’s bowl.

Winter Pheasant enjoys a bit of cat food. So does our resident hedgehog family. There is nothing like the clatter of a metal bowl being dragged over paving stones to rouse you from your TV slumber of an evening. It has the faintly disturbing sound you’d imagine from Marley’s Ghost dragging chains across an attic floor.

The Hoggits have also been known to scale the woodpile  and leap (well lurch really, remember their build is not altogether athletic and prickles can be cumbersome) on to that little blue bin you can see behind Winter Pheasant. Inside that bin is the treasure trove of cat biscuits.  The ambitious, over excited (that cat biscuit high gets them every time) and frankly knackered hedgehog then bounces about on top of the bin until it topples over.  The metal hooks on the bin are no deterrent to the over zealous Hoggit. He will drag that bin around the garden until it catches on something and the lid springs off. Hedgehog Heaven is then released all over the paving stones. By morning there is an empty bin,  several stuffed hedgehogs, a well fed pheasant, the magpies cleaning up the leftovers and a very angry and hungry pussycat who vows to tackle the wildlife situation here once and for all!